Bethel Chapel, Luton, began through inauspicious circumstances in the year 1873.      A few people had met by arrangement for prayer in the cottage of an old lady, too     ill to get to chapel. 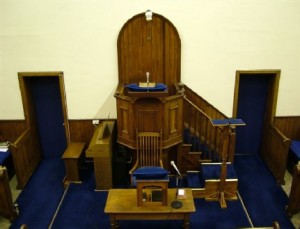 One of the number, James Newman, who had recently come to     Luton and started a shop in Chapel Street, announced a hymn and afterwards made a     few comments.  Those present so enjoyed what was spoken, that it was agreed this     meeting should certainly not be the last.

Soon the cottage was too small for the meetings.  After much prayer, on June 14th,     1874, “The Particular Baptist Meeting Room” was opened on part of the ground where     the chapel now stands.  This was made by Mr. Newman converting some of his workrooms.      James Newman’s himself preached regularly but was never formally the pastor. In     June 1881 he became pastor at the Particular Baptist chapel at Redbourn, a few miles     away, but maintained a close, loving connection with Bethel till he died rather suddenly     in December 1888.

Because of the unsuitability of the old chapel (part of it of corrugated iron,     and approached by steps at the front), the possibility of a new chapel was mooted     as far back as 1888.   From time to time the matter was raised and from 1901 plans     proceeded apace.  After various options were considered it was agreed to purchase     from Mrs. Newman, the land, buildings, etc. at present used and to build an entirely     new chapel.  This was completed in 1906 at a cost of about £1,250.  Opening services     were held on Monday, November 26th, 1906.

This is an outline of our beginnings. A more detailed history of Bethel was published     in booklet format in 1976, and this was updated 25 years later in 2001.  You can     read this booklet here.  Alternatively you can download the booklet in PDF format     which you can save to your computer if you wish.  Click here to load the PDF version.

From its earliest days Bethel has always had a Sunday school. This was begun on     the first Lord’s day of 1875 with 8 scholars and 3 teachers – Mr. Joseph Fookes (superintendent),     Mrs. Newman and Miss Greenhill. Less than ten years later there were 94 scholars     and 9 teachers, school being held morning and afternoon. Special mention must be     made of the loving, enthusiastic work in the Sunday school of Mr. Frederick George     Gurney. Appointed a teacher in 1914, and superintendent for many years, he was able     through God’s grace to complete 60 years in 1974 (though after 1967 handicapped by     the sore affliction of Mrs. Gurney, herself for years a devoted teacher). 1974 also     marked Mr. Gurney’s 60 years membership of the church, and at the prize-giving a     suitable presentation was made of a Bible and a lovely album (containing a photograph     of Bethel), autographed by the children and all the congregation.

Our Sunday school still continues, and the great day alone will declare what real     blessing has resulted from the teaching of God’s Word. The number of children varies     as some start and other leave but averages around 35.  Our deacon, Mr. Christian,     has been the superintendent for many years.  Our Pastor used to come in to address     the school once a month, but with increasing age this is not possible now.  He always     gives a special address at Christmas time and in the afternoon of our anniversary     services in June.

One striking incident may be mentioned. At the beginning of the 20th century, a     boy named Frank Bennett began to attend Bethel Sunday school. He belonged to a very     high church and was not happy at his own Sunday school. A friend asked him, “Why     don’t you come to ours?” and persuaded him to come to Bethel. Frank was much touched     by the kindness of his teacher, Miss Geary, and eventually attended all the services,     being blessed and then baptized in 1905, though much persecuted at home. Sad to say,     the boy who invited him drifted away from chapel and Sunday school altogether.  “One     shall be taken, and the other left.” Frank Bennett became pastor of a church in Shoreham,     Sussex and died in 1959. 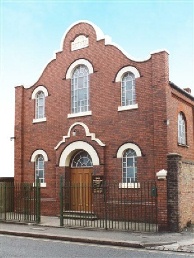