Lamberhurst Chapel was erected by Protestant Dissenter of the Particular or Calvinistic Baptists, practicing Strict Communion. The word ‘strict’ means that it is our church order for those only who have been received by the church upon the confession of their faith and then baptized by immersion to partake of the Lord’s Supper. The word ‘strict’ is derived from restricted communion as opposed to Baptist churches that have an open table. The Lord’s supper is kept on the first Lord’s day of each month. We believe Jesus Christ stood as a surety for a particular people whom no man can number from every nation, tongue, tribe and people. The Lord’s people are found among all truly Christian churches and are not confined to a particular denomination. A true child of God is a person who has been born again by the Holy Ghost and lives by faith in Jesus Christ.

The Strict Baptist churches trace their origins in England to about the year 1633. They are independent and self-governing. Baptists believe that the Word of God teaches that baptism is by total immersion and to be administered to believers only. Lamberhurst Chapel was built in 1816 the original members attended Matfield Green Strict Baptist Chapel and for 35 years Lamberhurst was regarded as a branch of Matfield Green. In 1851 the Lamberhurst members of Matfield Green were honourably dismissed to form a new church at Lamberhurst Chapel. In February 1851 Thomas Ray was elected pastor of the new church. He served as pastor until 1878. He was succeeded by William Boorman in 1881 who served as a faithful pastor until 1926. From all that we can glean it appears to have been a spiritually profitable period in the history of the chapel. Mr Jabez Field was pastor from 1973 until 1991. Whilst remaining independent, Lamberhurst Chapel has been  associated with the Gospel Standard group of churches for many years.

We use the 1611, King James, Authorised Version of the Bible we believe this is the most accurate translation of the Holy Scriptures in the English langauge. Please visit the Trinitarian Bible Society website for literature on this subject. We use  Gadsby’s Hymns. These hymns reflect the doctrinal and experimental nature of our preaching and worship. William Gadsby was the originator of the Gospel Standard magazine and compiled this selection of hymns. More hymns were added during J. C. Philpot’s editorship of the Gospel Standard magazine. William Gadsby and J. C. Philpot were the most distinguished editors of the magazine. The latter was a fellow of Worcester College Oxford and a minister of the Church of England. He seceded from the Church of England and was baptised by John Warburton in 1835.

The present pastor of Lamberhurst Chapel is Mr Jabez Rutt who was born at Westoning, Bedfordshire in 1951. He was baptized at Westoning Strict Baptist Chapel in 1972. He then moved to East Sussex in 1975 and transferred his church membership to Blackboys Strict Baptist Chapel in 1975. He was ordained a minister of the gospel of Jesus Christ in March 1985, serving as an itinerant minister until January 2007 when he became the Pastor of Lamberhust Chapel.  He has preached in England, Scotland, U.S.A.,Canada and Holland during the past 26 years. His one desire is to preach Jesus Christ and Him crucified to poor dying sinners. “For there is one God, and one mediator between God and men, the man Christ Jesus. Who gave himself a ransom for all, to be testified in due time. Whereunto I am ordained a preacher…” 1 Timothy 2:5-7 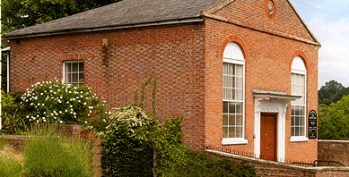